A while back, a good friend, poet, Joey Connelly and I thought it would be fun to collaborate on some haiku. We each wrote, five of the two parts of the haiku, dividing the poem as described by Tom Lowenstein, editor of the book that must be on every poet’s shelf, Classic Haiku. Classic Haiku is a gorgeous clothbound edition filled with traditional 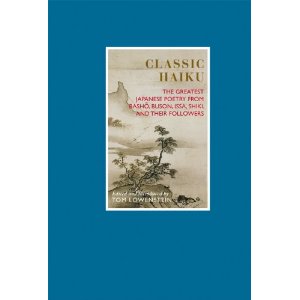 Within this format, the haiku was generally divided also into two parts standing in contrast or reversal to each other.  A poem might start with a traditional image such as cherry blossom, full moon or dew, then re-focus to a “lower”, perhaps clashing, image.

We wrote five two-line parts, one with five syllables and the second with seven, as the initial, and perhaps, more commonly evoked images.  We also wrote five single, five syllable “lower” lines, that in traditional haiku, “let in descriptions of ordinary life”  often with comedic or absurd results. Our goal was to end up with ten poems in, more or less, traditional haiku form. In this video, poet Robert Hass, demonstrates this concept of an initial idea placed up against a clashing or “lower” line.

At the time I was reading Classic Haiku and was intrigued by the notion that, “In many great haiku, seasons and images are suffused with a philosophical mood that introduces a contrast, tension or incongruity into a holistic vision of existence.” Lowenstein tells us that Bashō once told his Zen teacher that a haiku was a description of what is happening at a particular “haiku moment”.

By presenting imagery that flashes quickly and vividly on the mind’s eye, each poem recreates a unique, dramatic scene that expresses emotion and a philosophical awe in the face of some aspect of the natural or social world.

It was this idea of creating the unique, dramatic scene that delivers its impact through contrast,  introducing incongruity into our holistic vision of existence, that I found especially intriguing; and nothing creates contrast like mashing together lines written by two different poets. We emailed our lines to each other, then created combinations by mixing and matching our lines. I tended to come up with more traditional nature or seasonal images and Joey generally supplied interesting non-traditional ideas.

Following is the result of our collaboration—our shared haiku moments. We weren’t trying to create award winning poetry, but rather, we thought the exercise might yield some fascinating results. I’d love to hear your comments about our results, about haiku, or, about any experiences  you have had with collaborative poetry creation. The act of designing the collaboration and, then of the actual collaboration effort, such as the monumental undertaking by poets, Dean Young, Christopher Merrill, Marvin Bell, Tomaz Salamun, Simone Inguanez, Istvan Laszlo Geher, and Ksenia Golubovich, that yielded the book, 7 Poets, 4 Days, 1 Book, offer both poets and readers interesting artistic possibilities.

Bio: Poet, Joey Connelly earned his MFA from Ashland University in 2010 and is Assistant Professor of English at Kentucky Wesleyan College.  His work has appeared or is forthcoming in The Rumpus, Peripheral Surveys, Medulla Review, Louisville Review, and others.